From the frenzied pastorals of Greig to the crisp modernist melodies of Climent, the latest show at the Catherine Hammond Gallery, offers a plethora of creative approaches and artistic energies. Curated under the thematic umbrella of ‘Glow’ the works of nine artists from the gallery’s stable are held together in a sensitive and intriguing balance upon the gallery walls and plinths. They constitute both a curated viewing experience and a survey of some of the finest established and emerging talent in Ireland; a testament to the Hammond Gallery’s importance in West Cork.

It is possible to roughly discern two ‘meta-voices’ in ‘Glow’; these being the ‘informal’ and the ‘formal’, the ‘eruptive’ and the ‘contained’. Thus we find the restless over-spills and sprays of Greig and Colman in the former ‘eruptive’ camp, with the coloured graphics of Martin, McCreary, Climent and the others in the ‘contained’ camp. The latter group dominates, the crisp, harmonic associations between them constituting the core strength of the exhibition. The restless eruptions of Greig and Colman in a sense provide kinetic release from the sensitive restraint of the core group, whilst the Matisse-like work of Crozier provides a bridge between the two. 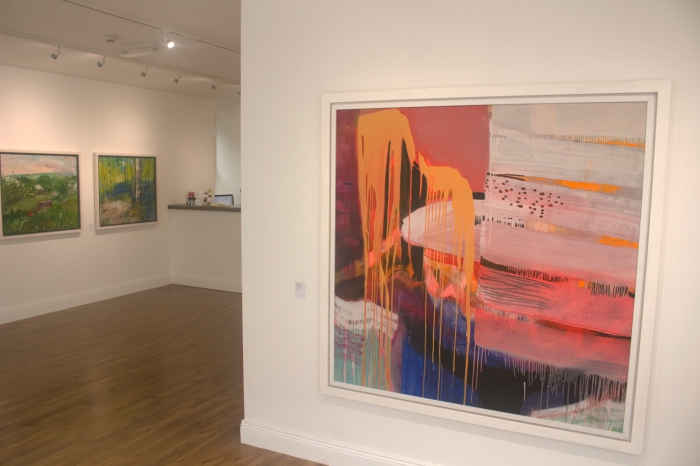 On entering the gallery one is first confronted by the ‘free-jazz’ spillages, drips and strokes of one of Ireland’s most renowned abstract painters, Eamon Colman. It is high-impact work on first sight, even if lacking a certain centre of gravity. Colman’s ‘high voltage palette’, to borrow the curator’s phrase, is tempered at the outset by Michael Ray’s cool, conical crystal work, William Crozier’s equally cool and rhythmic carborundum print, The Lure of Evening, and the glowing embers of James McCreary’s mezzotints.

James McCreary’s prints draw one like magical oases. They are Miro-like jewels of colour, created in mezzotint and aquatint. The subtle chromatic granulation of the ‘leaves’ vibrates softly upon the dark ground. Attention to ‘holes’ in the autumnal ‘leaves’ inevitably make one think of so many ‘eyes’. Their placement is reminiscent, somehow of the strange aura in the work of Juan Miro. 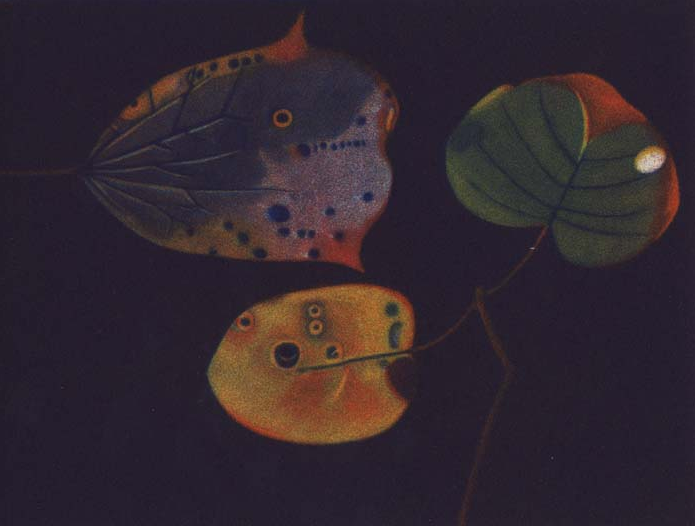 Facing McCreary’s Autumn Leaves I & II are the loose, crackling wires of Neal Greig’s impressionist pastorals, which dominate the left wall. Panning right, passed Colman’s broadly brushed Morning Swim by the Sultan’s Tower, the viewer is greeted by Peter Martin’s stained-glass urban-scapes. The rich, glowing colours recall the soft embers of McCreary’s aquatints and mezzotints. This is the point of entry into the heart of ‘Glow’. Rounding the corner the viewer is met by the serene, glowing abstractions of Tom Climent, hung opposite the bright fire-lit figure of Conor Walton’s Burning. To the right of Climent’s work a cast-resin eliptoid, by Ellis O’Connel feels like a physical manifestation of one of McCreary’s softly etched leaf-forms. 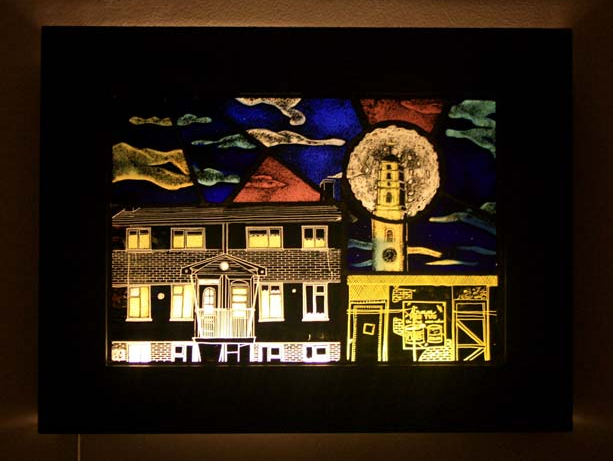 The highlight of the show is, for this viewer, the opposition between Walton’s Burning and Climent’s The Heart Holds I & II, The Heart Waits and Arandell. The two artists, from younger and older generations respectively, come from opposite ends of the painting spectrum. Where Climent has developed a compositional language over many years, based on the tenets of high modernism, Walton has emerged over recent years, under the influence of the anti-modernist Odd Nerdrum, as well as in response to contemporary photo-realist and post-modern trends. It is perhaps ironic, then, to find that their works compliment each other so well. Both artists share a sense of graphic precision and restraint, in combination with a preference for high-key colour. Both are sensitive craftsmen, and gifted practitioners in oil. Burning is beautifully composed and it is enjoyable to see the diamond-matrix pencil lines visible through the painting. Walton’s geometric under-pinning provides further synergy with Climent’s crisp, rhomboidal compositions. 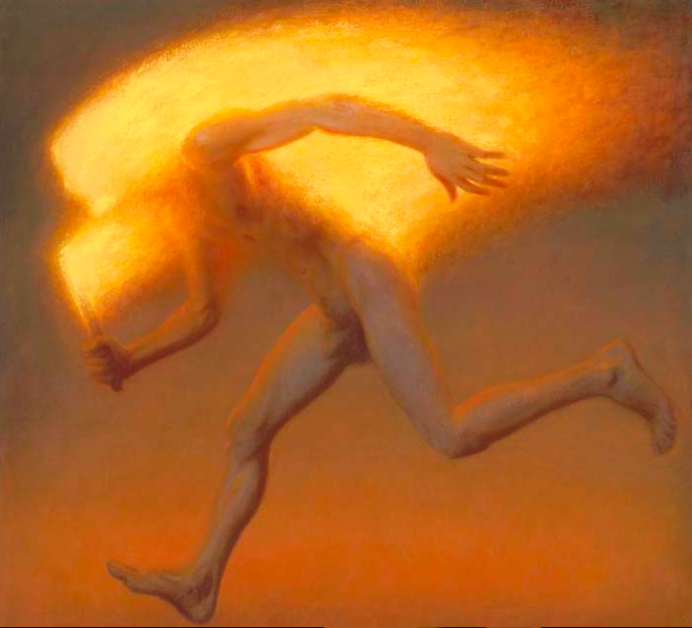 Walton is a very playful painter; his work mostly flaunts the sincere Classical creed, often enjoining comical and ironic imagery. Having shaped himself up as a new Classicist, he’s often proceeded to flirt with the post-modern, in a tongue-in-cheek kind of way. Walton, it must be said, is as near a painter gets to being a comedian. One wonders whether Nerdrum would approve, but it’s certainly refreshing. Looking at Burning with this in mind, it is very tempting to see an athlete with the Olympic torch, having caught himself on fire; a statement in anti-heroism, a cautionary tale in getting “too big for your boots”. In this sense it could be anti-Classical in a Classical kind of way. On a deeper note, the piece also puts me in mind of Tom Cowen’s book Fire in the Head: Shamanism and the Celtic Spirit. Cowen’s title is, in turn lifted from The Song of Wandering Aengus, by William Butler Yeats: “I went out into the hazelwood, / Because a fire was in my head, / And cut and peeled a hazel wand, / And hooked a berry to a thread…”. According to Cowan the “fire in the head” is a Shamanic term describing the state of enlightenment, “illuminating visions of other realities.” [1] 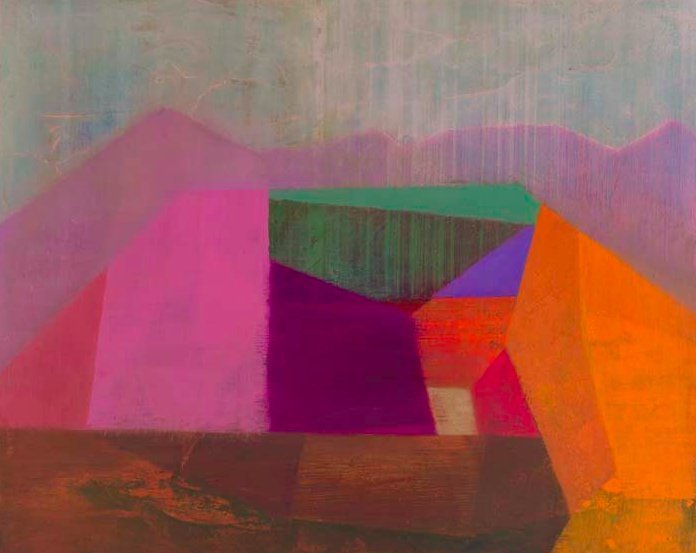 If Walton is flirting with the comical and the mystical, the heroic and the damned, Climent offers no such literary quandaries. His work is verbally silent and melodically sincere. Years of compositional distillation, construction, deduction and compression softly vibrate in the four panel works on offer in “Glow”. They are mysterious pieces, gently signifying both landscape and structure, whilst raising to the surface the inner tenements of colour-melody that haunt the painter’s heart. Layers of paint are built up, swiped, uncovered, painted over. The edges are soft, compartments of colour bleeding into each other. Tertiary chromatic zones are muted, like distant echo chambers, ricocheting intense fields of vermillion and violet, orange and viridian. Every chromatic zone pulses above a complimentary under-layer, increasing a sense of hidden reality, of vibrant secrecy. Climent offers us a door to the invisible by, at once teasing our code of seeing and playing the keys of a spatial piano. It is small wonder that he is enjoying enthusiastic reviews across the country.

Emerging from this encounter with Climent and Walton one feels the mystery of their opposition softly resonating with the other works yet never quite landing. Rich colours emanate from stained-glass, resin, crystal and mezzotint, linking the works by association, yet striking no real tension. And the ‘glow’ is largely lost in the broad-brush statements of Colman and the impressionist strokes of Greig. Their work really requires a shift in focus and platform, which I’ll refrain from here.

Two artists who do not feature in the show, but whose works softly pulse in the back gallery, are, however, worth mentioning, as their work greatly enriches the theme of ‘Glow’. They are the highly acclaimed Carol Hodder and Stephen Lawlor.

The work of these two wonderful painters holds a similar oppositional synergy to that of Climent and Walton. They both rejoice in thick impasto, subtle hues, gem-like glints of colour and the soft erosion of boundary lines. Hodder’s seascape / landscape evocations graze pure abstraction in a similar way, yet opposite form, to Climent’s tectonic renderings. Lawlor’s figures compliment Hodder’s vistas in the same way that Walton’s Burning does Climent’s compositions. His effacement/defacement through infinitesimal blends of colour looks with great knowing to the slowly disappearing horizon line, to the edge of the sublime that haunts the work of Hodder. 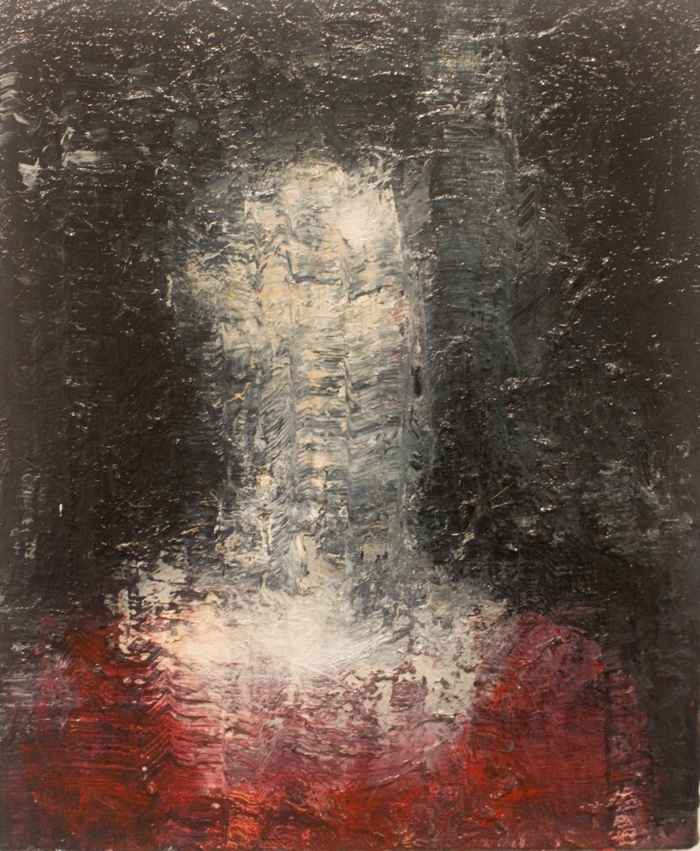 ‘Glow’ is a fine exhibition. It holds special riches for lovers of colour-melody (and I am obviously one). For others it is sure to yield many different riches through aspects, which my own eyes are not attuned to. Finally, Catherine Hammond should be congratulated for some excellent curation. Perhaps a show of the ‘sublime’ in Irish art could be on her thematic show list? One can only hint and hope!

[1] Fire in the Head: Shamanism and the Celtic Spirit, Tom Cowen, 1993, Harper Collins.

One thought on “Synergy and Opposition in the Heart of ‘Glow’, Catherine Hammond Gallery”