A band of stainless steel is wrapped tightly, like a fist, around a shaft of burnt larch, the ‘body’ from which the steel band comes, a semi-circular disc of the same, finely incised, drilled and cut – three segments of burnt larch sit snugly within the disc, juxtaposing starkly against the bright metal. Its title is Harvest Moon, one of seven assemblage sculptures in Moss Gaynor’s most recent exhibition, Everything in Time, which opened in The Loft Gallery, Clonakilty on the 24th of September.

Everything in Time is Gaynor’s second solo exhibition, the first, last year, having being the subject of this journal’s inaugural review. So it is fitting to return to Gaynor’s work, just as the WCR begins to slowly restart its own engines.

With the exception of Lines from an Iveragh poem, all the work is new. And yet it also feels, in another sense, old, that is somehow ancient. The bright, perfectly cut steel juxtaposes powerfully with raw stone and wood. The work feels totemic, myth-powered, primal and refined. An industrial looking disc shimmers like a shield, a corten steel crank, with an arm terminating in a stone, whispers quietly like a forgotten relic; an arc of weathered steel rises up to meet another, two arcs joined in a prayer called Satori. From where, one wonders, has this abstract language of steel, wood and stone arisen?

All art is comprised in some way of several key elements. These I would identify as follows: the artist’s Voice, the artist’s Historical Echo, the Mystery of Play, and the Mystery of Composition. These elements are at work in the way a unique voice is attracted to and interacts with particular materials in a way influenced by prior voices via the mysterious act of composition.

The most direct line of influence for Gaynor comes via fellow artist and some-time mentor, Don Cronin. Cronin’s recent work, in particular, reads like a cousin in steel to Gaynor’s. As Peter Murray points out, his sleek, modernist assemblages are as much a hymn to the machine as the ground-breaking work of Tatlin, Rodchenko and the Russian constructivists.[1] They talk to, and emerge from this early modernist base, via some generations of modernist sculptors between. Cronin’s studio pieces emanate a ‘space-age’ lyricism, like dissembled steel violins, cellos, harps and mandolins, long linear rods crossing the weathered steel planes like so many bows in motion.

In his essay, ‘Ghost in the Machine’, Murray notes Cronin’s “frequent emphasis on the diagonal, on slanting lines (which give) Cronin’s work a sense of movement and dynamism.”[2] It is this very same quality that we find in the new work of Gaynor. It is a quicksilver line, a diagonal rush that we find to be the primary force in Yelcho, Time nor Tide and Everything in Time. In combination with the diagonal line Gaynor employs, time and again a graceful arc. There is perhaps nothing more elementally resonant than the former slanting through the latter, like beams of light through the retina.

It is this sensation of slanting beams that the viewer feels in Lines from an Iveragh Poem, where three slender beams of steel slant upwards, through a horn-like arc of twisted, dark-oiled metal. For Gaynor Lines from an Iveragh Poem evokes the incoming rows of waves which he regularly observes on the approach to Waterville on the Iveragh Peninsular. It is a very personal association for a form, which at the same time ghosts the foundations of abstract sculpture.

Lines from an Iveragh Poem, stainless steel and limestone base

If Gaynor’s sculptural language has largely emerged from the modernist lexicon, via Cronin, his superb craftsmanship, and his love of metal work, come from an entirely different quarter. His affair with metal began in his father’s workshop, engaged in the engineering and manufacture of milking machines, graduating later on to applied metal design through a company he co-founded called MoJo Metal Designs. It is only four or five years ago that his interest began to turn, somewhat radically, to the world of sculpture.

After initial experimentation with representational work he quickly gravitated to a more formal, abstract language which we see the fruits of in Everything in Time.

By Gaynor’s own admission it is a language that is developing more and more intuitively. Planes, shapes, lines and materials find each other in the act of grinding, welding, cutting, twisting and assembling. Open frames of metal both rhyme and invert corresponding solid sections of steel, creating sensations of light and flow. Interceding steel sheets create rhythms and half-rhymes; bolts punctuate the flow like drum beats. Through this ‘mystery of play’ a composition evolves.

The above description is particularly pertinent to the surf-board-inspired pieces, Satori and Twinnie, which spatially open and close in a playful game of fragility and strength.

Twinnie, named after the ‘twinnie’ board pushes the dialogue between open and closed spaces to a wonderfully lyrical, and at the same time, existential state. The presence of the corporeal body, as the lower solid form, is mirrored above, as a harp-like window of emptiness. The slats of steel running between the two, bridged like a couple of frets, are resonant of strings on an instrument. Whether intended or not (the artist will typically demur on intentions – it is, after all a subconscious game we play) this duality between presence and absence, fullness and emptiness, appears to be integral to Gaynor’s language of form.

Another integral aspect of Gaynor’s formal language is the juxtaposition of natural object and cut, refined steel. This is a major point of departure from Cronin and where much of the energy in his work lies. The expressive nature and ‘breath’ of the raw object, whether it be stone or wood, acts as a cathartic release from the cold, non-relating quality of the steel. The limestone component in Yelcho, the artist explains, was initially much longer, however, broke during the assemblage process. Gaynor welcomed the breakage, the open energy of it, and used it with this in mind.

The stone in Everything in Time is also very powerful, though in a different way to the limestone in Yelcho. Everything in Time feels, ironically quite timeless. A Corten steel crank, with two long arms, one arm terminating in a lumpy stone, suggests the remnant of some large, forgotten time piece from another age. The terminal stone, however, gathers that sense of time-keeping and renders it mute, swallows it whole; it is as if, rather than ‘keeping time’, this relic of a ‘steam-punk’ clock, divulges timelessness, pointing us back to the hidden rhythms and hymns of nature, and ‘beyond’.

The dialogue between machined steel and natural object is a rich one, and one hopes will continue to be ‘broken open’ as Gaynor continues to forge his path through history’s echoes, the matter at his disposal and with the sense of wonder and curiosity which is ever the artist’s guide. 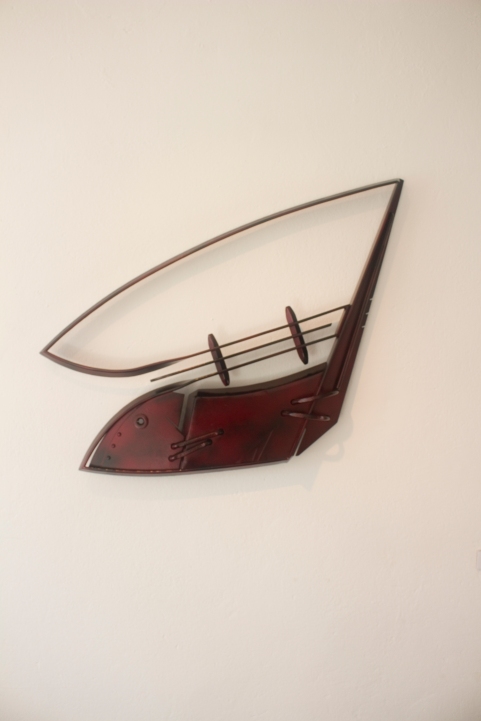 Everything in Time (detail), Corten steel and found stone